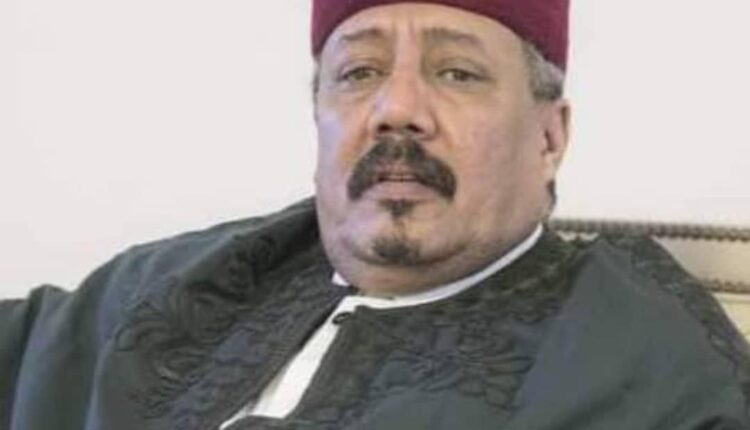 Al-Senussi Al-Haliq reveals his opinion about the oil fields closure, and says: “Sanallah is not suitable for even an official who is in “charge

The head of the Supreme Council of Zuwayya Tribes, Al-Senussi Al-Haliq, told our source that: “Oil is the property of all Libyans. It is a commodity that a region cannot monopolize. We always call for unity, convergence of views, stability and contentment.”

He said: “Back in 2019, when the war intensified in Tripoli, I gathered the tribes at the level of Libya and stopped pumping oil in order to inject blood. We are against war and for a Libyan to fight a Libyan. This is not permissible and we have no interest in it. We do not have any sectarian, religious, regional, geographic,or even tribal dispute.”

He added: “We are the kindest people, and nothing calls us to fight. We are against terrorism and extremist ideology wherever it is, in the West, East or anywhere. We do not have any differences.”

He continued, “The economic situation in Libya is bad. People are hungry and thirsty and they are not getting their salaries. We are against any oil field closure because it will make conditions worse than they are.”

“Oil should be excluded from political strife. We are not against Bashagha or against Abdul Hamid Dbeibeh. We are with Libya, with reconciliation and calm.”

He explained: “We want to arbitrate the voice of reason and logic, not the sound of the gun. Whoever wants power must go to the elections box. But if you want the authority and practice behind arms to destroy Libya in order to reach power. This does represent a benefit for the Libyan people. We want a safe and stable homeland, in which negotiation is governed by reason.”

Al-Senussi also said: “Our political situation in Libya is deteriorating. We hope that President Mohamed Yunus Al-Menfi will bear his responsibility and take a decision to freeze all political bodies from Parliament and the State Council, completely, and come up with a new body to get out of this crisis.”

He continued: “Libya has no solution except elections. We do not want elections to be called controversial ones. We also do not want corrupt money to be involved in it by buying votes. We want fair elections under the supervision of the United Nations Security and new faces for Parliament and the upcoming authority.”

He also explained: “It is supposed to move away from the story of quotas. Nothing destroyed Libya more than quotas. This country was not built by quotas, but rather the survival of the fittest must be.”

Al-Senussi continued: “We have no solution but peace and understanding, sitting at one table, and there will be a concession between us. If there is not, it will not succeed. Even the nominated government now headed by Mr. Bashagha, a government with 37 ministers?! What are all these people doing and what are their jobs?”

He added: “For ten years, we have been in postponement and transitional governments. We want to have authorities chosen by the Libyan people and to hear the voice of this people. We want parliamentary and presidential elections at the same time so that we can get out of this dangerous slide, and oil is supposed to be out of the game.”

Regarding the oil fields closure file, Al-Senussi said: “5 + 5 are specialized military people. We thank the two parties, and we want them to cooperate to unite the army and take the wise and right decision. Libya has only been reconstructed by consensus, and they get out of the circle that the military demands to stop flying. This, we have no interest in, but rather it is the harm of the Libyan people.”

He added, “Any armed conflict now has no benefit for us. We have our interest in Libya’s unity, stability, security and safety. Our country is now open from all sides and includes all foreigners without official procedures. Libya has become like a torn tent, with wind entering it from everywhere.”

Al-Senussi said: “Mustafa Sanalla is the reason for the struggles of oil in Libya. He abandoned his profession and became a politician. He is a specialized and technical man, but he lacks experience and leadership. He can’t even be a police patrol, not the head of an institution and he is the one who dragged the country into this situation.”

In conclusion, he said: “We are also disturbed by external interference in terms of opening and closing. Libya is now free of will and the decision is not in our hands. The United Nations must be honest in dealing and keep strife away from the country.”