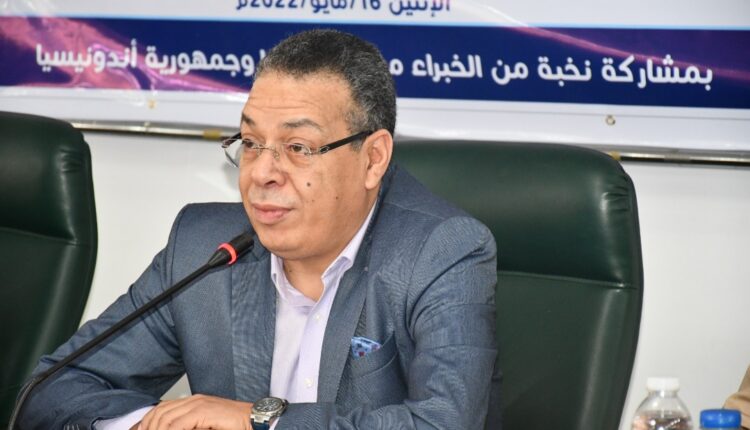 In an exclusive interview with our source, Dribel talks about the agreements concluded by the Chamber of Commerce and Industry of Tripoli with some countries

In his exclusive interview with our source, the Chairman of the Directors  Board of the Chamber of Commerce, Industry and Agriculture of Tripoli, Faraj Dribel, talked about the importance of the workshops organized by the Chamber, and the agreements it has concluded with some countries.

Dribel started talking about the details of the workshop entitled “Aquaculture, Fishing and the Blue Economy (Reality and Hope)”, which was organized by the Chamber today, Monday, May 16th, in the presence of the Indonesian Ambassador, the Minister of Marine Wealth, and a group of attendees.

He explained: “Today’s workshop is an extension of a previous workshop regarding the wealth of marine fishing. As a result of the existing international conditions, Libya must create food security. The wealth of marine fishing is a great wealth that can match oil or more but it is neglected and has no development. The world has now arrived in Hunting techniques that are far too advanced for us.”

He added: “The Chamber of Commerce, in its endeavor to develop economic activities and create new opportunities, contacted our counterpart in Indonesia through the embassy and coordinated the preparation of these workshops, as it is the country that owns the largest beach in Asia and is considered the second in Asia after Japan in fleets and fishing techniques. Through these workshops, the ideas and techniques of the two parties and the problems facing the Libyan coast of clutter and biological problems to the Indonesian experts were presented. We create a practical action plan that will be implemented during the next year. Next June, a delegation of businessmen, fishermen and specialists in the field of marine wealth will visit Indonesia to convey the ideas that have been developed. We seek to form a partnership between fishermen and traders with the brothers in Indonesia by transferring technology.”

Dribel also said: “Likewise in aquaculture, Libya can invest in it due to the length of its beach and warm climate, and this is better for generating fish unlike Europe. It is also known that the Gulf of Sirte is the only warm basin in the Mediterranean that receives tuna and turtles. Since it is warm, they spawn there. This point can be exploited in the process of fisheries.”

He also explained during the discussion about the details of the “marine projects and Libyan territorial waters,” by saying: “There are two projects in Libya in particular. We are interested in pushing this process so that we have a thousand aquacultural farms along the Libyan coast that produce for the local market and export abroad, and the issue of export is a long one that must create a high quality industry to be exported. Libya was looted from neighboring countries, north, west and east, but today it is controlling its territorial waters. This was confirmed by the Coast Guard, and after this step we must develop export techniques for foreign countries.”

Regarding the agreements established by the Tripoli Chamber of Commerce, Industry and Agriculture with the State of Indonesia, Dribel said: “Among the basic agreements is the field of training. As the Chamber of Commerce and Industry is determined to establish the field of training in the industrial and economic field, the Embassy of Indonesia offered us a beautiful idea, which is how to make small families get a distinct income through very simple micro-projects. We are in the process of concluding this agreement to create productive families in Libyan society that are self-sufficient and can sell their products. Also, we are seeking to sign an agreement to enter the palm oil product into Libya, but as a result of the global turmoil, Indonesia has stopped exporting, and today palm oil has a global demand and is indeed an alternative for many oils. We hope that this crisis ends so that we can start importing this technology.”

He added: “The labor force in Indonesia is one of the main points we talked about, but due to the Corona crisis and the instability in Libya, the matter has been postponed. But, we will sign this agreement so that we can provide a skilled workforce for Libyan industrialists, traders and contractors.”

Drible also spoke to our source about some of the agreements that took place with the Kingdom of Morocco, where he said: “Among the agreements concluded with Morocco, a training program in its final touches that will be announced soon. It is for the Chamber’s affiliates, businessmen in general, and the private sector that is targeted by the Chamber. We have also received the offer from the counterpart in Morocco, and some simple details regarding logistics remain to be worked on with the Moroccan side. There is a delegation from the State of Morocco, specifically from the Chamber of Commerce and Industry of Casablanca, who will come to Libya in the near future to establish business between the two countries.”

He said: “At the present time, the focus with the State of Italy has been on the exhibition on recycling, which is considered an art exhibition. The purpose of which is to recycle objects into art, and also to convey a message that recycling is an art, as well as trade and industry can happen.

He also said that there is another exhibition on “renewable energies.” Today, energy is a vital component in Europe, and the exhibition or conference will focus on renewable energy and how the private sector can enter these areas, as unfortunately the state has failed to produce normal energy, so how can it produce alternative energy ? In this case, the private sector has to intervene, as well as the entry of Libyan investments. The purpose of it is also to develop and try to explain the profitability method and motivate businessmen and the private sector to enter this field.

As for the Tunisian agreements with Libya, he said: “There is a historic opportunity for North Africa to exercise its right. We, as the private sector, are trying to take advantage of the opportunity because the world is being economically formed. We focused on Morocco, Algeria, Tunisia and Egypt. Libya is accepted by everyone, and there is consensus with us. There is a meeting soon in the presence of the Arab Maghreb countries.”

In the context of the conversation, Dribel said, noting: “Tunisia is a neighbor and there are many agreements between us. We have also communicated with the ministry to try to solve the problems that revolve between the two parties, including activating the signed agreements, especially in customs, movement and transport. We also submitted a proposal, which means opening a separated commercial crossing Exactly about the travelers crossing in order for the movement and productivity to be better. It was presented to the Sfax Chamber who was excited about this idea. The Minister of Economy expressed his willingness to present it with the Tunisian Minister of Economy in the coming period via the Pot. Among the problems we suffer from is the transit trade, as: from Germany to Libya shipping takes six weeks, but from Tunisia to Libya it takes four days. Tunisian customs do not implement the agreement to exempt the Libyan state from customs. We also put forward this idea, and if it is not resolved, we will impose on our state to be treated in the same way.”

Dribel concluded by saying: “Our goal is to solve the problems of Libyans and businessmen working in these arenas, including visas with the State of Morocco. So far we have succeeded and we were in Greece, and now, the visa was issued after the meeting and the agreements were signed. We are trying to create opportunities or eliminate existing problems for the members of the Chamber of Libyan businessmen.”