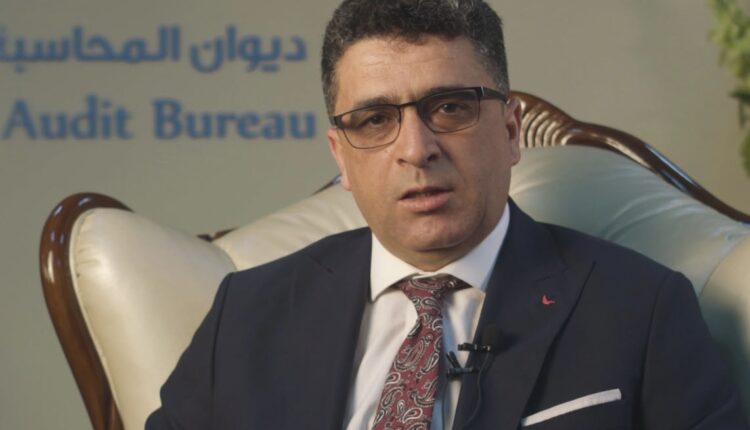 Shakshak reveals exclusively to our source the reasons for the NOC’s withholding of revenues, its bargaining and its legality, and what the patients’ file has resulted in

The head of the Audit Bureau in Tripoli, Khaled Shakshak, said in an exclusive interview with our source: “We met today in a meeting with the ministries of health and of finance and directors of centers in the National Cancer Program, as well as in the presence of the National Center for Organ Transplantation and the Central Committee that was formed from the Ministry of Health concerned with detecting cases of muscular dystrophy Spinal.”

He revealed: “We reviewed the report of the scientific committee specialized in examining suspected cases of this disease, and the total number of cases that emphasized the need to expedite their treatment reached 5, which will be dispatched as soon as possible, and there are dozens of cases that need permanent treatment that can be supplied through the Libyan Ministry of Health in the form of shipments of medicines, whether syrups or injections.”

He continued by saying: “Turning to the oncology file, we discussed the problems faced by oncology centers and agreed to grant them “financial independence” in a way that they can supply their own medicines and provide the required capabilities.”

He added: “A team will also be formed to sign twinning contracts with the International Medical Center in Egypt and some other centers specialized in kidney, liver, cornea and heart transplants. Its objective is to receive treatment services and to localize treatment by attracting medical personnel from visitors, as well as to provide some needs that are not available in the Libyan centers.”

He revealed that the biggest challenge and problem that will face us in the coming period will be with regard to foreign exchange transfers, considering that the National Oil Corporation has withheld revenues for a while, and this is because of its problems with the Central Bank, which we hope will be resolved during the coming period. Since all services and goods that we benefit from are linked to cash, the continuation of this problem will affect the cases of patients abroad. It is also expected that it will affect the supply of goods and services.

Shakshak stated: “What the National Oil Corporation has done by withholding revenues is an unusual behavior and in violation of all applicable laws and legislation. We have addressed the Corporation more than once in this regard, warning that what it is doing is a legal violation and a great risk to public funds.

In addition, it will reflect negatively on the national economy, especially with regard to the value of the currency and the provision of society’s needs, the most important of which is treatment. The Central Bank will not be able to transfer foreign exchange in the case of blocking, and the only way it can use it is to redeem deposits abroad that will reduce the value of the Libyan dinar.”

He stated that what the institution continues to do is an irresponsible act, and we have started preparing a file on this issue, part of which has been referred to the Public Prosecution and another part will be referred soon, in addition to a series of measures we will have to take if a solution is not reached, in line with the law.”

The Head of the Bureau stressed that the National Oil Corporation does not have the right to acquire foreign exchange until it withholds it. What it is doing is an attack on the funds of the public treasury, and it only owns what is allocated to it from the budget.”

He stated that withholding revenues is stipulated in the Economic Penalty Law, which is an explicit violation of preventing the flow of state revenues according to their natural and known context. The continuation of such behavior requires taking measures towards it, whether from the government or the Audit Bureau and the Public Prosecution.

He added: “We did not find an explanation for such behavior other than that it is irresponsible and will cause great damage to the macroeconomic level, despite the apparent reasons by the institution.”

Regarding the reasons for the corporation’s withholding of revenues, Shakshak revealed that there are two contradictory reasons – unfortunately – the first of which is that withholding revenues is an alternative reaction to closing oil. On the other hand, asking the head of the institution to allocate a budget and liquidate it completely for its accounts before supplying foreign exchange, and this is a misplaced bargain.

He stated that “the size of the budget requested by the Corporation, according to the report of the meeting, which I reviewed, is 37 billion for one year, which is a large budget in my opinion. The oil sector can be demanded and invested but not in the way we see it now.”

He stressed that the National Oil Corporation wants to obtain its budget from the source, by deducting part of the revenues in its favor even before it is referred to the Ministry of Finance and the Public Treasury.

He added that deducting revenues directly and transferring them to the National Oil Corporation means that the corporation must be transformed into a holding company, that many measures must be taken and that a certain percentage of sales be determined, and this is not available.

Shakshak revealed that the repercussions of what the Corporation has done in the coming days will begin by “depriving” patients of access to treatment services, and the process of removing patients from hospitals in external treatment yards will begin due to the suspension of financial transfers from hospital dues and service-providing companies.

He continued by saying: “We may also notice a decrease in supply and an increase in the prices of some commodities. The situation may develop into a liquidity crisis and an exchange rate difference, such as the one that occurred in 2014. All of these possibilities are possible and we hope that they will not happen.”

He concluded his speech by saying: “We will give the government and the institution an opportunity to solve this problem, otherwise the Bureau will intervene to take a position to prevent the continuation of these behaviors.”

The liquidity team reveals to our source the arrival of the sixth shipment, worth 60 million, to Benina Benghazi Airport

Shakshak to our source: « This is what will be caused by the National Oil Corporation withholding revenues from the Central Bank. We have referred a file in particular to the prosecution »